Diane Long is Palisades Montessori’s lead Primary Teacher. Diane is a fifth-generation Washingtonian. She earned her BA from Georgetown University, and holds her AMI Primary Diploma from Washington Montessori Institute and her MA in Education, Loyola College.

Prior to joining Palisades Montessori, Diane spent 21 years as a teacher and administrator at Butler Montessori in Maryland. At Butler, Diane started the school’s first Pre-Primary Class and All-Day/Year-Round Class, in addition to being a Primary Lead Teacher. She also has 15 years of experience as Camp Director for Butler Camp, and contributed to all aspects of day-to-day operations of a large Montessori school, including admissions and program direction.

Diane is a certified ropes course facilitator and canoe instructor, a passionate gardener and a runner. She is the mother of four grown sons, and the delighted grandmother of two young granddaughters. 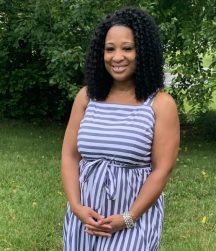 Gwendolyn Hines is Palisades Montessori’s Infant and Toddler Community Director and Teacher. “Ms. Gwen” is a master educator with 18 years in Montessori education. She is also an instructor of Toddler Pedagogy at the Montgomery Montessori Institute for Advanced Studies in Rockville, Maryland. In the past, she directed a Primary program at Toddlers on The Hill in Washington DC; served as a consultant for adult learners at the Institute for Advanced Studies in Silver Spring, MD; and led a variety of programs and seminars for prospective Montessori parents. Gwen truly believes in the authenticity of Montessori education, especially in early childhood. As a young child, she attended a Montessori school during her Primary years – and she still remembers her experience as a student to this day. Gwendolyn is the proud mother of a 13 year-old son, Christopher, who recently had a birthday and is an official teenager now! She is also a fiancée, and a bonus mom to Michael, age 11, and Sayla, age 16.

Meagan Garrison is Palisades Montessori’s Primary Program Teacher. Originally a Montessori child herself from fourth through eighth grades, Meagan fell in love with Dr. Montessori’s philosophies. She received her AMI Primary Diploma in 2011 from Washington Montessori Institute along with her M.Ed. from Loyola College in Columbia, MD.

During the first three years of her career, Meagan taught at a public Montessori school in Washington, D.C. She joined Palisades Montessori in 2015, after falling in love with the beautiful setting and peaceful class, and has enjoyed every minute since she joined.

In her spare time, Meagan loves rock climbing, camping, and bluegrass music. She loves to sing and plays a little guitar and banjo.